LED vs. Halogen vs. Xenon: Which is Better for You?

Last updated on Jan 04, 2021 by Joshua Thomas
Affiliate Disclosure: When you buy through links on our site, we may earn an affiliate commission at no cost to you. 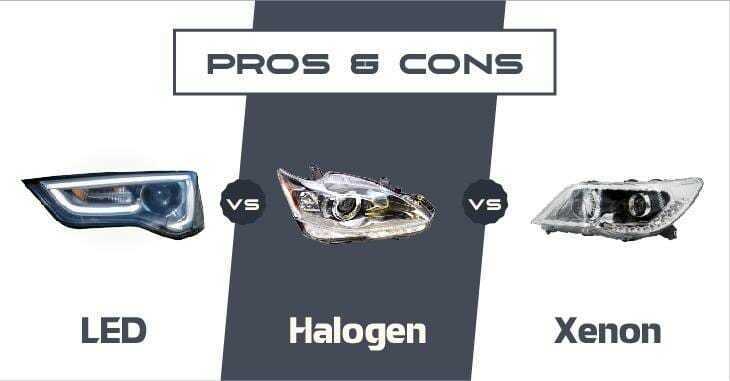 Headlights are one part of cars that continue to witness innovations and redefine the way we see the automobile. This evolution of headlights got powered by the steady development of different light bulb technologies.

For many car owners, these different bulbs and their names can get confusing, making it difficult to choose if a headlight change becomes necessary.

LEDs, Halogen, and Xenon bulbs are 3 outstanding technologies, which got developed and perfected over the years, and which offer different advantages and disadvantages from one another. 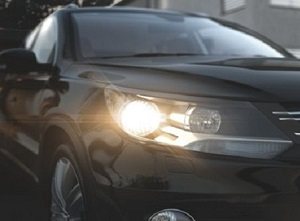 Halogen bulbs are the standard bulbs used in the headlights of most cars. They were first introduced in Europe in 1962 and in the US in 1979.

The main advantages of halogen bulbs are that they are cheaper than the others and easier to install as well. Halogen also produces a decent amount of illumination, although it is still less bright than Xenon and LED lights.

Halogen bulbs can get very hot. Its filament will heat up to about 2,500 Celsius when working and it has the lowest lifespan among the 3 bulbs, which is anywhere between 200 and 1,000 hours.

Halogen bulbs are basically incandescent bulbs. That is, they contain a filament like tungsten, which when electricity passes through it, begins to glow and becomes visible light.

The first difference with halogen bulbs is that they are smaller than standard incandescent lamps of the same wattage, and they also have halogen gas inside the bulb, instead of the vacuum in normal incandescent bulbs.

This halogen gas prevents the tungsten filament from darkening and slows down its thinning process, which eventually happens anyway, but later.

Halogen, therefore, extends the life of the bulb and allows it to reach higher temperatures without burning out. As you should know, a higher filament temperature means a brighter light. 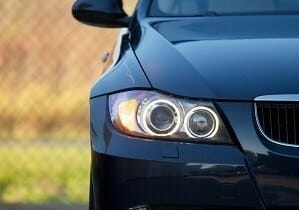 They produce the whitest and the brightest headlights, brighter than halogen lights and using even less energy than halogen bulbs.

The first use of a Xenon headlight was in a 1991 7-Series BMW. It has since then spread to other vehicles since it offers many advantages over halogen headlights.

One disadvantage of Xenon lights is that they need a few seconds to power up to maximum brightness. This has limited the scope of their applications.

Xenon or HID bulbs are more complicated than halogen bulbs. First of all, they need a few seconds to power up each time they get switched on. Secondly, new Xenon bulbs need to get used a few times first before they can settle in.

When you switch on the light, a high-voltage spark ionizes the Xenon gas inside the tube and gets energy flowing through it. Unlike halogen bulbs, there is no filament here.

As the current continues to flow, the current inside the tube rises until it becomes hot enough to melt and vaporize the metallic salts inside it. This increases current flow and the bulb reaches its full potential.

Lots of energy is passed through the bulb in these early stages, but once it reaches its maximum brightness, Xenon bulbs only need minimal amounts of energy to keep up their brightness. 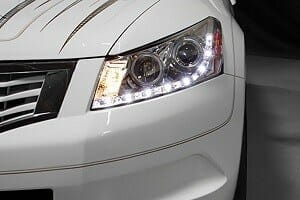 LED stands for Light Emitting Diodes. They are the most energy efficient of these three headlight lamps and have actually been around for decades, with red LEDs being the most popular.

With the recent development of white LEDs, engineers found many applications for it, including using it in car headlights. A single LED is smaller than a Xenon bulb, so LEDs also get used in more flexible ways.

LEDs use very little energy and stay cool when working, but their arrays and surrounding circuitry usually requires cooling. A single LED hardly produces enough light, so LED bulbs are usually an array of LEDs.

While LED headlights are brighter than halogen headlights, they are slightly less bright than Xenon bulbs. They also do not glare, although they are far-reaching enough.

LED headlights can additionally be designed to produce a specific shape of light, since it uses an array of individual LEDs, instead of a single bulb.

They are the longest lasting of these 3 headlights and it has been forecast that over 70% of new cars will have LED lights by 2030.

LEDs give out light as a result of electroluminescence, which is a natural phenomenon that was first observed in 1907 by scientists.

LED stands for Light Emitting Diode. A diode is an electronic component which only lets the electric energy flow in one direction. It gets made using semiconductor materials., Some types of diodes will also react to light changes in the environment and get used as sensors.

When two semiconductor pieces get joined together, with one being positively charged and the other being negatively charged, they create a diode, which also emits light when current passes through it.

Over many years since the first LED was functional, engineers had to figure out how to shape the color of the light being emitted. Red, Green, and Yellow were easy, but it took much longer to develop the white LED.

If you're caught between the 3 lamps and need to make a choice, the following table presents information that'll help you choose the right lamp which meets your needs.

For those who are seriously on a budget, Halogen bulbs are definitely the answer but remember that they'll need more changing in the long run than the other headlamps.

If you would like to save some money but still want a great lighting package, or if you want the brightest headlights you can get your hands on, then a Xenon headlight could be for you.

Else, if you want the best headlights and are not worried about spending a little extra, then LED headlamps are the future, so why not try them out?

Thanks for letting us know!
Was this page helpful?
Related Posts