Last updated on Mar 12, 2021 by Joshua Thomas
Affiliate Disclosure: When you buy through links on our site, we may earn an affiliate commission at no cost to you. 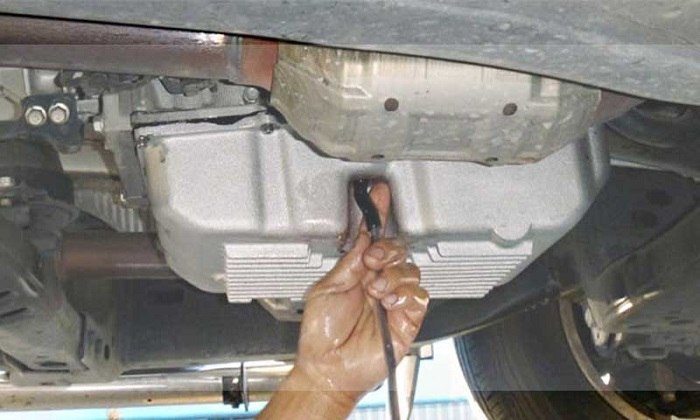 A leaking transmission system will not only mess up your driveway and garage floor with a puddle of red fluid but can also have adverse effects on your vehicle.

If the transmission fluid is leaking, it means there will not be enough of it in the transmission system, and hence it will not function optimally, which leads to overheating and other problems like erratic shifting.

Hence, a transmission leak is one of those vehicle problems that will require immediate attention. But, to fix the problem, you will first need to know how much the repair will cost.

Below we explain in detail how much you are likely to spend on a leaking transmission system, but first, we highlight some of the main causes of this common vehicle problem

While you can go up to 100,000 miles before you need to replace your transmission fluid, a leak in the system will force you to do it much sooner.

But, in many instances, it is possible to prevent transmission leaks if you know what causes them in the first place. Here are some of the most common causes.

While this might seem like an obvious cause, many motorists still do not seem to understand the importance of adding just the right amount of fluid to their transmission system.

Adding too much fluid means that the extra liquid will subject the fluid port to more pressure than necessary as it tries to escape which eventually leads to leaks.

Many motorists will not add too much transmission fluid knowingly, but rather because they do not check the level accurately when adding the fluid. The fluid has to be at the right temperature, and the vehicle parked in a level surface to get an accurate level indication from the dipstick.

The transmission fluid line will be typically made from durable materials like steel and aluminum, and one can rightfully expect it to last a lifetime. However, this is not always the case because like other parts of the vehicle, it can still get damaged accidentally.

If you have a broken fluid line, then there will be a place for the liquid to try and escape which causes leakages.

Excess heat and accumulation of debris can also cause the transmission fluid line to crack, and hence lead to leakage.

A transmission fluid pan is also typically made from heavy-gauge metal, and so it will last a long time. But, like any other metal components, it is subject to wear and tear, and over time, it can become worn out to the extent that it leaks some transmission fluid.

Heat and heavy knock by rocks are some of the other things that can lead to leaks in the transmission pan.

However, it is also important to keep in mind that the pan will contain several bolts and drain plugs, and in case one was damaged or became loose, the transmission fluid can start leaking from there.

This exposure to heat eventually causes the seals to crack, which then leads to transmission leak as they will not be able to hold back the fluid effectively.

And it is important to note that there are different seals in the transmission system that can lead to leaks such as plug seal, shifter housing seal and the output shaft seal.

Over time, the material used to make the pan gasket will degrade and hence allow the fluid to leak. Also, if the gasket is not properly aligned during installation or maintenance, it is highly likely to leak. 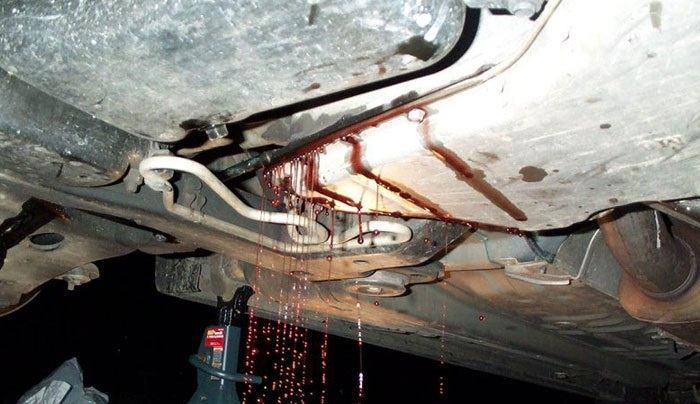 Because the transmission system is a complex vehicle component with several parts, repairing a leak will often require you to remove and replace or repair these individual components.

Hence, the cost of repairing the leak will largely be depended on the part that requires repair or replacement. And this is because these parts come at different price tags and also the labor cost for working on them will be different. With some parts, you can spend as little as under $50 while for others, you will need to part with upwards of $1,000.

Here is a more comprehensive breakdown of transmission leak repair cost based on different parts of the transmission system that might cause a leak, and hence require repair or replacement.

Front seals are what is tasked with ensuring that the transmission fluid stays where it is meant to be, and faulty ones are often the main cause of a leak. The front seal does most of the job, and when it is bad, you can almost be certain there will be a leak.

Replacing the front seal can be quite costly given the amount of work involved. On average, you can expect to spend at least $400, but some vehicle models will require you to have a budget of at least $1,000.

If something happens to the valve body such as a fluid leak or there is an electrical fault, you will often need to replace the entire thing.

The valve body will supply the operating pressure required by the transmission gears for their operation, and hence it has to be in good working condition always.

For a complete replacement, you need to spend between $200 and $500 for the parts, and the labor cost will also be in the same range.

Solenoids are small components tasked with a crucial task, which is to control the gear shifts, and if they are not working properly, one of the symptoms can be a transmission fluid leak.

For some vehicles, the solenoids are mounted externally while for others, they will be on the inside. But regardless of where they are, repairs are relatively cheaper when compared to other transmission components.

Depending on the type and number of solenoids you want to replace, you can expect to spend as little as $15 for the parts to as much as $100, and the labor cost will be around $200 to $300.

In some instances, some cases of leaking transmission fluid might indicate a severe problem, and you will not have any other alternative besides replacing the entire transmission system.

A complete transmission system rebuild or replacement will entail replacing all the parts in the system from the internal gears to the clutch plates.

If you are lucky you can have your entire transmission system replaced for as little as $2,000. But, in most cases, the average cost for parts and labor will range between $2,500 and $6,000 and even slightly more than this.

Note: These costs can vary greatly from one place to the other given the differences in parts and labor costs, but they should give you an idea of what you are likely to spend when repairing a transmission leak. 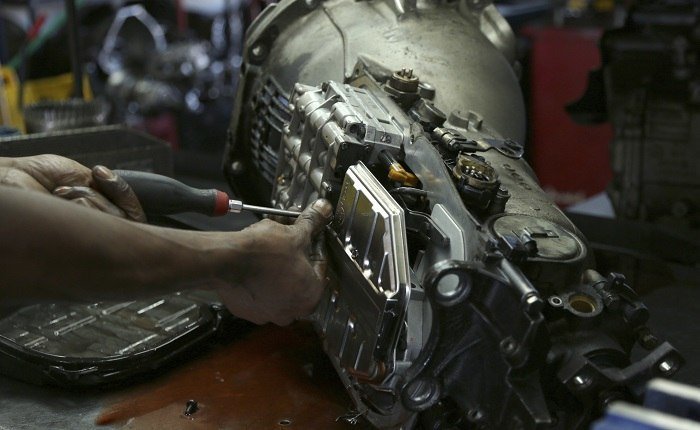 Transmission leak repairs can be costly given the volume of work involved in repairing and replacing the different parts and also the cost of the parts. However, it is possible to prevent these costly repairs by taking good care of the vehicle. And here are a few tips to help with this.

Transmission fluid leak is one of the most common problems of the transmission system, and as a motorist, you should be ready to deal with it at some point in the lifetime of the vehicle.

Like most other transmission system issues, the cost of fixing a transmission leak will be highly dependent on the specific source of the issues, or in this case, the part that is causing the leak.

You can spend as little as $50 when dealing with simple and easy to replace parts like solenoids or as much as $6,000 or even more when you have to replace the entire transmission system.

What all this means is that the extent of the problem will determine how much you part with. Hence, the wise idea will be to prevent the problem from the onset with regular maintenance and fixing the problem as soon as you notice it to ensure you never have to deal with costly repairs.

Thanks for letting us know!
Was this page helpful?
Related Posts